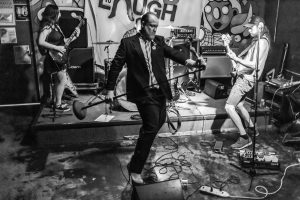 Hurts to Laugh has billed itself as “Nashville, Tennessee’s gnarliest band” since 2007.  The group operates under the leadership of skateboarding Vanderbilt Divinity School drop-out Cliff Cobain and was once assisted by John Davis and Tom Pappas of Superdrag,  as well as Juno nominated songwriter/ guitarist Toby Penner.  The group independently produced a slew of music videos and slogged its way across the county with four national tours doing shows in bars and skateparks from Raleigh, North Carolina to San Francisco California.  The band’s current line-up of Nashville rock scenesters is no less potent or ambitious as it delivers its second 7″ vinyl release for Fat Elvis Records in 2020.  This latest offering entitled Mister Nineteen Eighty More and its accompanying music video is a dark Orwellian send-up of dictators, demagogues, and strongmen.  The band’s aggressively creative vision has broadened with its horizons as it grapples with hard political realities shaping our culture, nation, and world.